The Colour Wheel of Tech: Why Apple hates Google, Facebook is the new Microsoft, and more

July 20, 2015 1 Comment
When it comes to ‘out of the box thinking’, one specific box I’d like people to get out of (or at least use significantly less) is our boundless love of n-by-n tables, matrices and grids that help us organize our thinking. People seem to really like to categorize things with right angles- as if, should we put one factor on the X axis, another on the Y, and a third on the Z, their perpendicular arrangement will specifically lead to insight and clarity. This technique works, sometimes. But every once in a while, we see something totally different that is simpler, more elegant, and more illustrative than an n-by-n table. This can happen when we stop thinking rectangularly and to start thinking circularly.

For anyone reading this article who is geek-friendly, consider the 3-by-3 grid of character values used by the Dungeons and Dragons universe. A player (or character, or monster) can be placed somewhere on a scale from Good to Neutral to Evil, and then again from Lawful to Neutral to Chaotic, leading to nine possible combinations (and more, if you accept intermediate cases). That’s a lot of categories, without being all that interesting or illustrative. Compare this categorization scheme to the far more innovative and beautiful colour wheel from Magic the Gathering – one of the great frameworks of the gaming world. The colour wheel is simple, elegant and perfect: five colours (White, Blue, Black, Red and Green) arranged in a circle, each having two neighbours (its allies, with shared common values) and two opposites (its enemies and moral opponents). Green, the colour of life and nature, allies with white (Life / Good) and red (Spontaneity / Chaos) while being enemies with Black (Death / Evil) and Blue (Artificial / Unnatural). Every point on the circle has its unique perspective, complete with perspectives, allies and enemies, forming a framework that says far more than any square matrix ever could.

Thinking about the MTG Colour Wheel, and how perfectly it captures these values and differences, got me wondering why this circular framework hasn’t yet been applied to the tech world. No rectangular matrix quite captures why Google can see so eye-to-eye with Twitter or Amazon yet be so perfectly antithetical and hostile to Apple and Microsoft. No table really shows why products like the Kindle Fire Phone, iCloud, and Bing were/are so dysfunctional, while the prospect of Google buying Twitter, or Uber partnering with Amazon, just feels natural and right.
With this in mind, I put together what I think could qualify as a first draft for the ‘Colour Wheel of Tech’. I chose seven companies – Apple, Google, Facebook, Microsoft, Amazon, Twitter and Uber – that I feel form the core ‘agenda setters’ in the tech world: the ones who, when they announce something new, people really listen. Obviously this list is not a full representation of the big players – I would’ve loved to include a few Asian tech giants like Alibaba and Tencent, and Uber stands out as the only young Unicorn of the group (although I feel deservedly so). That being said, I think there’s more than enough to work with just from these seven companies, so here goes: 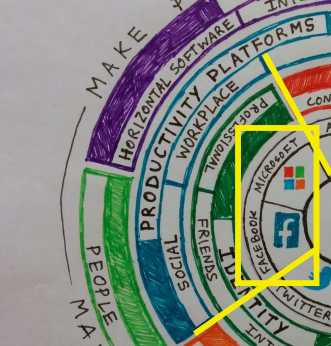 It also speaks to Uber’s terrifyingly large ambition to be the de-facto organizer of the entire physical world and all its contents. While in the original split, Uber was appropriately classified as a Tool-oriented company rather than a List-oriented company, the current divide highlights Uber’s real challenge. That is, to truly operate on mission and at scale, Uber must essentially build and operate PageRank for the Physical World: to index, categorize and deliver the entire physical world and its contents much the same way Google did so for the web. So while Uber ultimately operates in ‘Tool mode’ as a Premium Enabler company, their principle problem is one of vast abundance rather than one of scarcity – categorizing them as a ‘Organize the World’s X’ company rather than as simply a productivity platform. It’s why, although I totally think that Apple could build a car (they’re also a premium enabler / productivity platform company, and do it very well), they could never be Uber. After all, do you really think Uber hired the Carnegie Mellon math department and the original Google Maps team just to make its taxis a little more efficient?
Finally, it’s worth taking a look at the outermost ring of text in the circle – how these companies make money, and how well aligned these companies are to their revenue generating mechanisms. Building a premium productivity tool to help you interact with the world? Looks like you’re Apple- you should be making money by selling devices. Do you cultivate engagement and eyeballs through a social network organized around people’s interests and conversations? Looks like you’re Twitter- you should be selling advertising. Do you organize all the world’s purchasing, transactions, goods and services? Looks like you’re Amazon – you should be facilitating transactions and monetizing each one. When everything lines up perfectly, great things happen – as Ben Thompson of Stratechery puts it, “Powerful things happen when culture, competency and opportunities are aligned.”
All of this being said, there’s one major product that on the surface appears to make no sense in this framework:
What about Android?
Android (by some lines of argument, the world’s most successful product to date – having reached a billion users in barely over five years) makes no sense on this graph. It’s a key piece of Google’s weaponry, by all accounts a massive success, yet falls in nearly every category opposite Google’s side of the circle. It’s a productivity platform (like iOS), a horizontal software enabler that extends into apps and the web (like Windows Phone was designed for, kind of) and an interface to help you interact with the world around you.
So what’s the deal? In my view, although Android has undoubtedly been a huge success, this circle layout offers some explanation as to why, 6 years later, Android still at times feels very foreign to Google. Consider the recent Google I/O developer conference where the Android half of the conference felt very stiff, unnatural and uninspiring while the Google Services half of the conference was so full of life and ambition it almost felt like magic. Yet that’s not actually a knock against Android – in fact, it’s even more impressive that Google pulled it off, given how opposite it is to Google’s core competencies. Remember, Google acquired and launched Android not to compete with Apple but to compete with Microsoft – they desperately needed to make sure that the mobile internet would not be locked up behind a proprietary operating system they didn’t control, and they succeeded. The fact that they were able to do so while reaching so far across the board – even if Android still feels like a foreign limb to Google at times – is especially impressive.
In conclusion: think in circles! I’ll follow up on this post at some point with some extensions, such as what future moves and products this framework suggests, as well as perhaps an abstracted version that is truly more like a colour wheel (rather than simply seven companies arranged in a circle, and their core characteristics laid out accordingly). In the meantime, I invite you to comment on whether you agree or disagree on this framework and placement, and where you’d put other big movers like Alibaba, Xiaomi, or Airbnb – feel free to add your thoughts to the comments section, or tweet at me @alex_danco.