August 24, 2015 21 Comments
Breaking news! The stock market is crashing! Everybody panic! Unicorns are going to die!!!
Ok, so maybe we’re overreacting a little. But today (Monday, August 24) saw a nice little 4% ‘correction’ in the stock market, and a bit of panicking in the tech world as Apple, Google, Facebook, and Amazon stocks (and many more) all took a substantial haircut. (Tim Cook rode to the rescue and saved the day … for about a half an hour. And maaaay have broken some rules. Still, he tried!)
Today’s brouhaha did, nonetheless, give additional fuel to the ‘We’re in a bubble!’ fire – and especially the notion that there are going to be some dead Unicorns really soon. Noted Doomicorn enthusiast Bill Gurley had plenty to say about this, and without a doubt some of today’s lunch discussions in the tech world revolved around that nagging question – which $1B+ tech companies will die, and when? And what about the first Decacorn – the fabled $10B+ companies?
I certainly feel that, bubble or no, we’re going to see one or two of these fabled companies go under at some point no matter what. No matter what the state of market frothiness or investor panic, the rate at which things change in the tech world is so fast that there’s really no way that every big, private tech company could survive being outcompeted, disrupted, or flat out made irrelevant for too long. I don’t care how much innovation and hustle they have in their collective C-suites; at some point, some of them are going to come to a sudden, shocking realization that… they just don’t matter any more. The horror! The big question is inevitably – as Lenin asked – Who, Whom? Who’s gonna die, and at whose hands?
A startup’s greatest fear initially isn’t competition from others – it’s simply the worry of being ignored and irrelevant. Past a certain stage of growth, and now you’re worried about your competitors – what if they can built it better, cheaper, faster, stronger? At yet another point, though (I’d argue around the $1B valuation mark) your peers aren’t your biggest concern anymore. If you’re worth a billion dollars, you’re probably doing enough things well that your direct competitors can’t take you to the cleaners overnight. Instead, your nightmares shift to a fate even scarier than being outcompeted: being eclipsed. Specifically, being eclipsed by someone at one level of the stack above or below you.
What does this look like in practice? It’s what Microsoft did to the PC manufacturers, and then what the web browser did to Microsoft. It’s what Android/iOS did to the handset makers, and what Facebook is trying to do to them in turn. To those being eclipsed, it’s terrifying because the change happens so gradually and then so suddenly: Compaq was one of the best PC makers around until all of a sudden Windows was what mattered, not the machine it ran on. Then a bit later on, Windows ruled the world and Microsoft was King- but all the interesting stuff started happening inside the web browser. My point being: Compaq didn’t get creamed because somebody else came along and made a better desktop PC. They lost because all of a sudden Windows was what was important- and other PC Manufacturers like Dell were better suited to thrive in the new reality of modular commodity.
I preface my unicorn prediction with all of this to emphasize once again – when billion dollar tech companies die, it usually isn’t at the hands of their direct competitors. It’s simply because they go from one day being the best at what they do, to the next day being still the best at what they do except it doesn’t matter. When these companies are really big – i.e. in the $10B+ Decacorn range – it matters.
So who will be the first Decacorn to fall? My bet is Dropbox. But not – as has been the worry for years – because of Google Drive, or Skydrive, or any cloud-hosted file storage solutions at all. As we’ve seen before, it isn’t your direct competitors that are the scariest.
Dropbox will die at the hands of Slack.
You may not have considered Dropbox and Slack to be competitors, because they’re not – in the typical sense. In fact, ‘We integrate with all the services you use already, like Dropbox’ was part of Slack’s pitch early on. That’s because Slack and Dropbox aren’t really peers: they’re neighbours along the workplace stack:

You might think that a communication and workflow tool such as Slack would be a great compliment to a storage and version control service like Dropbox – and you’d be right. But as Slack rises rapidly through the tech scene and beyond into the outside world, they and others like them are changing the very requirements of our work itself. As Benedict Evans writes succinctly, new tools start out being made to fit existing workflows, but over time the workflows evolve to take full advantage of the tools. Referring to the ubiquitous Internal Presentation full of company metrics and bullet points circulated around countless departments by email each day, he muses: “That powerpoint file could be replaced by a web app for making slides that lets two people work on it at once. But it should be replaced by a SaaS dashboard with realtime data, alerts for unexpected changes and a chat channel or Slack integration. Powerpoint gets killed by things that aren’t presentations at all.” So that’s great for Slack, but why the pessimism towards Dropbox specifically?
Dropbox does two things that matter: storing your stuff, and sharing your stuff. It’s great at both. But storage on its own isn’t a great business to be in anymore – the cost of hard drive space in the cloud has all but converged to zero over the last few years, in a furious race to the bottom driven by Amazon’s infrastructure and Google’s reach. Yet Dropbox has survived, not because it offers the cheapest or the most storage but because its file sharing and versioning tools are still pretty darn good. And they recognize that syncing files isn’t enough – providing services and experiences around that core function, they say, should do the trick. But Dropbox’s big existential problem isn’t how well it can deliver services around file management: Dropbox’s problem is the fact that it’s a great file management service – we just don’t care about files that much any more.
Dropbox, in many ways, represents the perfect final form of that old and venerable office presence: the file system. In ‘the old days’, offices were outfitted with stacks of cabinets for storage, copy machines for duplication, and internal mail departments (sometimes with awesome pneumatic tubes) for transmission. Then computers came along, and naturally we organized our stuff the same way we always had: through virtual files and folders (with icons that even looked like the real thing). When you’re getting used to new technology, some familiarity never hurts. Then we adopted email en masse, and sent our files with cumbersome attachments that were always too big. Then the cloud came along, and with it came the promise that all our files cloud live forever, in the cloud, accessible by everyone, always, in perfect synchrony. So what’s the problem? 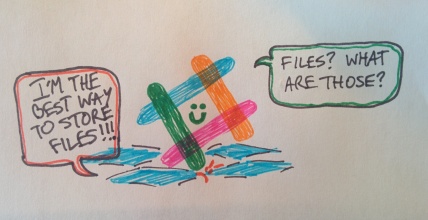 The problem for Dropbox is that our work habits are evolving to make better use of what’s available; specifically, the awesome power of the internet. And on the internet, the concept of a ‘file’ is a little weird if you stop and think about it. Files seem woefully old-fashioned when you consider organization tools like Evernote, task management tools like Trello, and communication channels like Slack. Files are discrete objects that exist in a physical place; the internet is … pretty much the opposite of that. And while it made sense that the birth and early growth of information and the internet would contain familiar, old-school ideas and organizing systems, and some point the other shoe was bound to drop. To me, Slack feels like the first truly internet and mobile-native productivity platform – especially as it expands beyond messaging and into workflow automation, helper bots, and who knows what else. Dropbox might be the pinnacle of file management, but Slack is the beginning of what comes next.
I don’t think files are going to completely disappear; not anytime soon, anyway. They’ll certainly still exist as data structures, deep inside our servers and our phones, for a very long time – and yet most people will be indifferent to their existence. I’m pretty sure Dropbox’s multi-billion dollar valuation isn’t an anticipation of this new reality – it’s simply a projection of our current world, played in fast-forward. This is gravely shortsighted. Dropbox may not be the first Unicorn to slide slowly and then quickly towards irrelevance and death – but it’ll happen. And with it, we’ll finally put to rest an aging, useful and stately way of doing things – the humble file – that shall have lived a long and dignified life.
Ok, go publish this on WordPress. Thanks, Slackbot. 🙂