Someone asked me an interesting question the other day: “What was the most entrepreneurial situation you’ve ever experienced?” I suspect, from the nature of our prior conversation, that they were expecting some answer to do with Backtrack, or TandemLaunch, or possibly my research. The first experience that immediately came to mind, however, was none of those. It took place a few years ago in a small northern town you may have never heard of called Kapuskasing, Ontario. Here is what happened:

First of all, before TandemLaunch and before Backtrack, I used to be in a band called The Fundamentals.  The Fundamentals (who are still around, by the way- check them out!) are a ‘Ska, Soul & Rock’n’Roll’ band, and part of the Stomp Records label group. I joined them in the summer of 2010, when they parted ways with their original keyboard player and brought me in. We meshed pretty quickly as a musical group, and before long we were on the road playing shows. The following summer, we set out on our very first cross-country tour, an essential rite of passage for a young band. Armed with our newly purchased, rickety 15-passenger van, which had been previously used as a florist delivery service as well as a prison transport vehicle, we set out to conquer the west. What could go wrong?

So, here’s the thing about driving across Canada: far more so the United States, which for the most part is populated across the entire contiguous 48 states, the Trans-Canada drive takes you through some pretty empty places. The loneliest stretch of the Trans-Canada is in northern Ontario, where the fastest way back to Montreal actually swings far to the north on Highway 11, almost a thousand kilometers north of Toronto and nearly as far from anything else. After a few initial problems in the first few days, the van had held up reasonably well- until we pulled off the highway to fill up on gas in Kapuskasing, Ontario, where upon downshifting something seized in our transmission and we ground through gears 3, 4, 5 and 6 in about four painful, jolting seconds. We were stunned. Unable to bring the van beyond second gear (which in its overloaded state was about 35 km/hr), we were essentially prisoners in this small town of 8000, which contained no sign of any open garages, and where we knew no one. 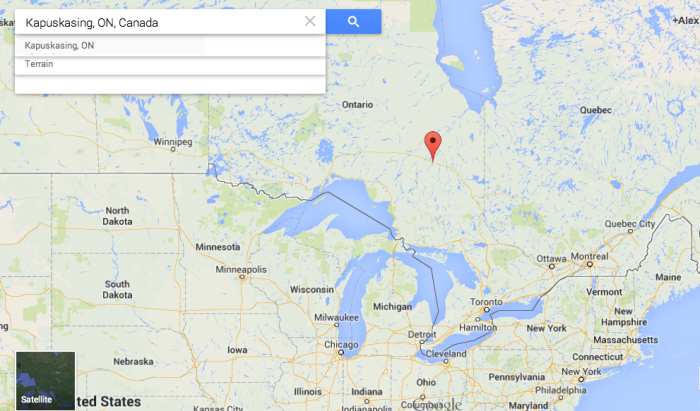 Sitting in the empty Canadian Tire parking lot, it would have been easy to adopt a defeatist attitude. But Julia Gellman, our fearless champion, immediately sized up the situation and outlined to us the following:

Well, our van is broken and we can’t leave. But the more immediate problem is, we don’t know anyone here- how can we fix that? Let’s find the nearest bar and book ourselves a show there for tonight! That way, we’ll meet everyone who shows up, and potentially find some help.

This was the idea that saved our skin. We quickly got ourselves the evening bill at The Empire, the town bar, in exchange for a hundred bucks- a pretty cheap fee for live music, but well worth it for us in exchange for the chance to meet people. Sure enough, people showed up- a lot of people, actually. News travels fast in a small town, and many of them had heard about our predicament and offered whatever they could to help. We were offered food, houses to stay at, and endless mechanical advice- some of which proved valuable, some not so much- but which eventually, after a few days, helped us solve the problem. (Which involved a slow drive to Timmins, a new transmission at a referenced shop, and the evaporation of all our tour profits and then some.)  But the lesson wasn’t lost on us: we were able to get ourselves, our van, our gear and our band unity back to Montreal intact because of some well-timed entrepreneurial hustle.

Thinking back, it’s pretty clear to me that entrepreneurial thinking doesn’t necessarily involve a product, a market, or a company. It’s a mindset focused on identifying solvable problems– and then going out and solving them why whatever means you can. It’s about viewing a bad situation as an opportunity for some creative problem solving, hustle and salesmanship. So next time you’re in a tricky situation, see how you can ‘entrepreneur yourself out of it.’ I hope for your sake that it doesn’t involve a broken transmission – it turns out they’re pretty expensive to replace.